What is a Railfan?

A Railfan or Rail Enthusiasts, Train Watchers often have many names to the hobby of watching train, railroads, railways. this group of people comes from all over the World. For the manytrain-watchers,

This article is about railway enthusiasts. For the Railfan video games, see

Railfan photographers in Belgium, at the farewell of the 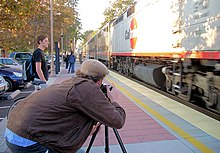 Railfan photographing a Caltrain  service in the United States

Railfans of many ages can be found worldwide. Railfans often combine their interest with other hobbies, especially photography and videography, radio scanning, railway modelling, studying railroad history and participating in railway station and rolling stock preservation efforts. There are many magazines dedicated to railfanning such as Trains and Railfan & Railroad.

In the United Kingdom, rail enthusiasts are often called trainspotters or anoraks. The term gricer has been used in the UK since at least 1969 and is said to have been current in 1938 amongst members of the Manchester Locomotive Society, according to the Oxford English Dictionary. There has been speculation that the term derives from “grouser”, one who collects dead grouse after a shoot, but other etymologies have also been suggested.[3]

In the United States, the term foamer is used as a derogatory term for railfans.[4]

In Australia, they are sometimes referred to as “gunzels“.[5][6]

A train parade on a railway test circuit in

at the LOXX Berlin model railway

The hobby extends to all aspects of rail transport systems. Railfans may have one or more particular concentrations of interest, such as:

The scope of the subject is so large that fans may additionally concentrate their interest on a particular country, town, operating company, field of operations or era in history – or a combination of any of the above. 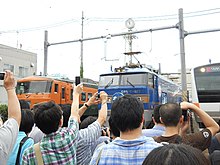 Railfans taking train photos at the 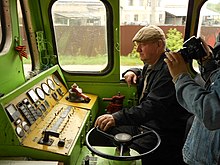 Train photography is a common activity of railfans. Most railfans do their photographing from the public property unless they have permission to use a specific private property owner’s land. Occasionally, they run into problems with law enforcement, especially due to post 9/11 paranoia, because they are sometimes viewed as suspicious. In 2004, for example, the New York City Subway attempted to institute a photo ban. This was met with fierce opposition and was ultimately scrapped.[7] Another example includes the Port Authority Trans–Hudson (PATH), which, unlike the New York City Subway, successfully implemented their photo ban, which is still in effect today, although this restriction predates the September 11 attacks. This has led to confiscations and arrests on the PATH system.[8]

However, if people register for a special permit to take photos and videos with their professional camcorders, they are exempted from the bans. With proper registration, filming and photography are regarded as amateur enthusiast activity and thereby there is zero risks of danger. 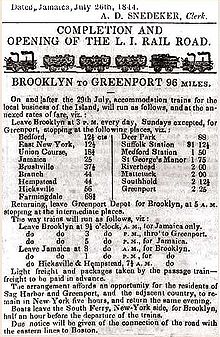 Those who are “trainspotters” make an effort to “spot” all of a certain type of rolling stock. This might be a particular class of locomotive, a particular type of carriage, or all the rolling stock of a particular company. To this end, they collect and exchange detailed information about the movements of locomotives and other equipment on the railway network, and become very knowledgeable about its operations.

A trainspotter typically uses a data book listing the locomotives or equipment in question, in which locomotives seen are ticked off. In Great Britain, this aspect of the hobby was given a major impetus by the publication from 1942 onward of the Ian Allan “ABC” series of booklets, whose publication began in response to public requests for information about the rolling stock of Southern Railways.[18] Sometimes, trainspotters also have cameras, but railway photography is mostly linked to railfans.[who?] Moreover, in contrast to modern railway companies’ attitudes, at its inception in 1948 British Railways handed out free copies of a locomotive data book to school-children.[citation needed]

Some trainspotters now use a tape recorder instead of a notebook. In modern times, mobile phones and/or pagers are used to communicate with others in the hobby, while various internet mailing lists and websites aid information exchange. Railbuffs can maintain private computerized databases of spotting records as well. Radio scanners are common equipment for listening to railroad frequencies in the US to follow rail traffic.[citation needed]

It is a misconception that all railfans are trainspotters. Many enthusiasts simply enjoy reading about or travelling on trains, or enjoying their rich history—this may extend to art, architecture, the operation of railroads, or simply modeling, drawing or photographing them.[citation needed]

The term “bashing” is used by railway enthusiasts to mean several different things. “Bashing” used on its own is a general term for a railway enthusiast’s trip, excursion or holiday involving train travel and observation.[citation needed] “Line bashing” is more focused, and would be an attempt to cover as much of a railway network as possible. This can also be called “track bashing” especially if the person wishes to try to cover individual sections of track such as crossovers and sidings, in addition to completing an “A to B” journey on each section of line. In the UK (especially), Germany, and to a lesser extent in other countries, railfans often use a special excursion train for railfans (usually known as a “railtour”) to cover freight-only railway lines in order to complete their coverage of a country’s rail network.[citation needed] “Shed bashing” is a term used by train spotters to describe going out to as many railway sheds (or depots) as possible. These were very popular in the 1950s and 1960s. As they required a permit and this could be hard to obtain some “shed bashers” were illegal.[19] Another development from trainspotting (almost unique to the UK) is the “haulage basher” or locomotive haulage enthusiast[20]

Many railway preservation groups run special trips for railfans using restored trains, often on “rare mileage” locations that do not see regular passenger service.[21] These trips are both social events, as well as an opportunity for railfans to photograph unusual trains. Chasing a fantrip by road for the purposes of photography is often referred to as “motorcading” in Australia. [22][23]

A brakeman’s lantern from the

Many railfans also collect “railroadiana” or “railwayana”. Railroadiana refers to artifacts from railroads and railroad operations and could include nearly anything to do with a particular railroad, including public or employee timetables, locomotive number boards, dining car china, passenger train tickets, tools and pieces of equipment such as lanterns, or sometimes items as big as train horns, or track speeders. Although few can afford the acquisition cost or the space for storage, some railfans collect full size rolling stock or locomotives.[citation needed]

The overgrown remains of

Searching for and exploring abandoned railways is another area of railfan interest. Using old maps, one may find the former route, and the abandoned railway stations, tunnels and bridges may remain after a railway closure. Some abandoned rail rights-of-way have been converted to rail-trails for recreational use such as bicycling, walking, hiking, running or jogging. This would be considered railbanking, where the right-of-way is preserved, by keeping it intact, for the potential reactivation of rail service in the future.

Some railfans are interested in other aspects of railroads not directly dealing with the trains. They may be interested in studying the history of the railroad companies, their infrastructure, law, financing and operations, including never-built plans. Abandoned railroad grades can often be found long after the railroad stops using them. Trams (and occasionally even monorails) may also be of interest.[according to whom?]

Various magazines, clubs and museums are designed mainly for railfans, concentrating on the history of trains and railroads. Some clubs organize fantrips, either by car or by train; the New York Transit Museum owns some old equipment with which fantrips are occasionally run on the New York City Subway.[citation needed] 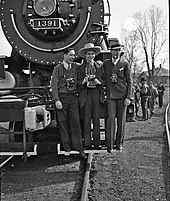 Railfans on a 1939 camera excursion train in

The motivation for someone developing an interest in railways can come from many sources.[25][26]

Many railfans focus on steam locomotives, which sometimes also fascinate the general public, as seen by the attendance at stations to view steam-hauled railtours. Sometimes the appeal of trains is nostalgic, recalling an earlier era when the railroads played a central role in commerce and transportation, and the station was the center of every town. Nostalgia may also result from the long, lonesome wail of the train’s horn, which mimics vocalizations that want for a more simple time reminiscent of home, as heard in country or folk music worldwide.[27] Sometimes the appeal is due to a fondness for large machinery that can be inspected and photographed up close.

Sometimes there is an appeal of the scenery of the railroad running through open, uninviting terrain, or the gritty ambiance of the urban train yard. In this case, urban exploration poses a similar appeal. Some people were raised near streetcar tracks or railways. Everyday activities were associated with railroad, which seemed to be a part of life. This may lead to an interest in railcars, how they move, numbering, and other rail systems in the world and how they compare with their native ones. If these people move to another locale, their interest in railroads might be nostalgic.[citation needed]

Another appeal of the railroads is the business side of railroading. Railroads were long central to economic growth and commerce, and still are to some extent. The history of railroads and railroaders (such as James J. Hill) is a fascination for some, whether they view them in a positive way as capitalist heroes or in a negative way as robber barons.

Railfans in the United States have been asked to keep railroad areas safer by reporting crimes and suspicious activity.[28] In the United Kingdom the British Transport Police have asked trainspotters to report any unusual behaviour and activities at stations.[29]

The BNSF railway instituted the “Citizens for Rail Security”[32] (CRS) program for the general public to report suspicious activities on their railways. Obtaining this card is common for railfans and is a derivative of the BNSF “On Guard” program for employees. However, this card does not recognize members as employees or contractors, and asks them to keep off railway property. Amtrak offers a similar program, “Partners for Amtrak Safety and Security” (PASS).[33]

Network Rail, the British rail infrastructure owner and station operator, has produced guidelines for the behaviour and responsibilities of railway enthusiasts at its stations.[34] In May 2010, the dangers of acting carelessly in the vicinity of an active railway were highlighted after an enthusiast, standing next to a double track line photographing the Oliver Cromwell, failed to notice a Turbostar express train approaching at 70 mph on the nearer track in the other direction, and came within inches of being struck by it.[35][36]

Railfans have jargon that can be foreign to others: