Welcome To the HighBall Newsletter Page

The Highball Online Newsletter is a Monthly news feature of Newenglandrailroading.com. Each month will have info about something going on in the railroad Industry or some information about railroad history or other cool news article send to us by a website visitor.

Today I added  some new news story’s that I found on Trains.com that I put into the Highball Newsletter area that covers some of the Railroad company’s that call New England home. One story is about the WASHINGTON – The Northern New England Passenger Rail Authority, which sponsors Amtrak’s Downeaster service between Brunswick, Maine, and Boston, says it backs CSX Transportation’s proposed acquisition of Pan Am Railways. and at the Us Capital with a  transit Bill, with $66 billion for rail — including $58 billion for Amtrak — and more than $100 billion for transit, now goes to House

WASHINGTON — U.S. freight volume for the week ending June 26 remained well ahead of figures for the same week a year earlier, while also showing a small uptick from previous-week figures.

Statistics from the Association of American Railroads show that U.S. railroads moved 516,167 carloads and intermodal units for the week, a 12.4% increase over the same period in 2020 and a modest increase over the 514,112 carloads and units of a week earlier [see “U.S. rail traffic continues to outpace 2020 figures,” Trains News Wire, June 24, 2021].

The latest figures include 237,117 carloads, a 17.7% increase over 2020, and 279,050 intermodal trailers and containers, an 8.2% increase. The carload traffic shows increases over the 2020 figures in nine of 10 commodity categories, the lone exception being motor vehicles and parts, where production continues to be constrained by a computer-chip shortage.

This month My roommate and myself tock a MBTA Communter Railroad trip to visit Rockport Massachusetts, this trip started early morning to get the time to spend in Rockport to record some video Footage for our other project

, it’s a awesome project of our and I hope you will check it out. We started this trip from North Station seeing some work being done on track near the station Platform  ther was only  a small workgroup of track Maintenance workers, on the trip forward we made the station stops until we got to Beverly, Ma. the train we was on could not go any further downline due to Track Maintenance  to install in PTC Track wiring being done and the The Gloucester Drawbridge, which carries the Rockport Line over the Annisquam River, is being replaced. The current bridge was built in 1911, reconstructed in 1932, and updated in 1984. The MBTA suspended service across the bridge in April 2020 due to unforeseen site conditions. We are bused around that area on Cape Ann Transit Authority (CATA) with alot of stops from Beverly to Rockport MBTA Communter Railroad Station

to visit an updated story and Awesome Photos from the MBTA website about the Bridge). We Got to Rockport MBTA parking lot and walked to Downtown Rockport. We eat at

, it was an awesome view of the Rockport Harbor, however  my roommate report his lobster roll was cold and soggy, My fish and chips meal was great, just wish I asked for more tartar Sauce. we look around and stopped at the

(This Store IS AWESOME) with a working real player piano (I remember this store because I had visited this store many times with my Parents during our family vacations). we also stopped by a candy store called

where they had an old taffy wrapping  machine dating back to the early 1900  (not making taffy at time of visit) but they make some awesome taffy (we got a bag of taff) and made a video outside of store.  We filmed alot of stuff and my roommate is going to edit and upload it to youtube when it ready.  the same bus company picked us up at the rockport station after a 1/2 hour rest time for the driver which i did not mind and gave me time to take photos of the building and the other things in the station area, there was not any locomotives in the yard at the time because of the  construction on the rockport line. so we hopped on the bus to ride from Rockport to

but we stopped at every station along the way to pick up more passengers and finally got to the Beverly station where we got on the train to go back to boston. We met a nice cople from Miami Florida  they were so nice to talk to on the way home and to rap up the trip. I hope you enjoyed my report on this trip to Rockport, please send me some feed back and let me know how I did writing this Report.

I hope this finds you all in Great health, and wellness. We are very close to reaching  the middle of the year and the kids are getting ready for Graduation, I would like to first start this newsletter by saying  to those Graduating, i am so happy to share in the excitement of your on Graduation day and I am so proud to wish you Congratulations on your will deserved success, and would like to wish you Many success in your Future Career.

(Above )New Greenline to College Ave

The Green Line Extension (GLX) will extend the northern end of the Green Line from Lechmere to Union Square in Somerville and College Avenue in Medford.

GLX will provide service in areas that historically did not have access to fast and reliable public transit. By supporting an increased ridership of more than 50,000 trips per day, this project will significantly reduce vehicle emissions on the road.

What to Expect During Construction

Starting on May 24, 2020, Green Line service will shut down at Lechmere and Science Park stations for approximately one year while crews work on the Lechmere Viaduct Rehabilitation in conjunction with Green Line Extension work.

Cambridge -Green Line Week in review  (Check this out)

WASHINGTON — CSX Transportation’s proposed acquisition of New England regional Pan Am Railways will have a significant impact on employment levels at Pan Am Southern, the joint venture it will share with Norfolk Southern.

Genesee & Wyoming, which has been designated the neutral operator of Pan Am Southern, estimates that it can run the railroad with 25% fewer employees than current operator Springfield Terminal, according to a CSX regulatory filing posted to the Surface Transportation Board website on Wednesday.

Overall, Pan Am Southern employment will drop to 159 employees from the current 214. The biggest cuts are to the maintenance of way, which will be halved, and the shop and signals workforce in East Deerfield, Mass., where employment will fall by more than a third.

The Pan Am Southern consists of about 425 miles of rail lines and trackage rights routes, including the former Boston & Maine mainline between Mechanicville, N.Y., and Ayer, Mass., that provides NS access to New England via its so-called Patriot Corridor. Pan Am Southern also includes the north-south route Pan Am uses between White River Junction, Vt., and its branches in Connecticut via Springfield, Mass.

Pan Am Southern will lose the daily pair of NS intermodal and automotive trains that run between Mechanicville and Ayer. The trains will shift to trackage rights on CSX’s parallel Boston & Albany route and will reach Ayer via Providence & Worcester and Pan Am trackage north of Worcester, Mass.

Genesee & Wyoming will operate and maintain Pan Am Southern under its Pittsburg & Shawmut subsidiary, which will do business as Berkshire & Eastern. Three of G&W’s New England railroads — New England Central, Providence & Worcester, and Connecticut Southern — connect with Pan Am Southern.

NS had sought a neutral operator for Pan Am Southern. CSX and NS will jointly own Pan Am Southern, with NS retaining its 50% share and CSX acquiring Pan Am Railways’ stake. CSX has agreed to sell its stake within seven years if NS “or its assignee” wishes to buy out CSX.

That has surprised some observers, who note that duplicate facilities — such as Pan Am’s headquarters in North Billerica, Mass., and the locomotive and car shops in Waterville, Maine — are typically rationalized in end-to-end mergers.

Topic: ‘Satan’ says he was flirting, trying to get a date on the Boston subway 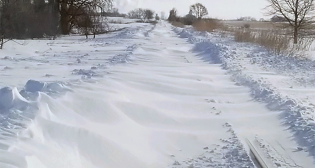 The Association of American Railroads, in reporting U.S. rail traffic for the week ending Feb. 27, 2021, as well as volumes for February 2021, noted that volume took a polar vortex hit.

Topic:Public turns on its town to preserve land pursued by short line railroad

Residents in Hopedale, Mass., are taking their town to court over land they believe should not have been sold to a short line railroad.

CSX has been the victim of a ransomware attack, which became apparent when screenshots of internal CSX files were posted to a “leak site” yesterday. CSX told FreightWaves that it recently discovered the attack, and the only data stolen, as far as they know, was the personal data of CSX employees, both active and retired.

Topic:MBTA’s Phase 1 work of South Coast Rail is moving along

Topic :Weekly Rail Traffic: Up, Down, Up

CSX Corp. [yesterday] announced fourth-quarter 2020 net earnings of $760 million, or $0.99 per share. These results include a charge of $48 million, or $0.05 per share after-tax, related to the early retirement of debt.