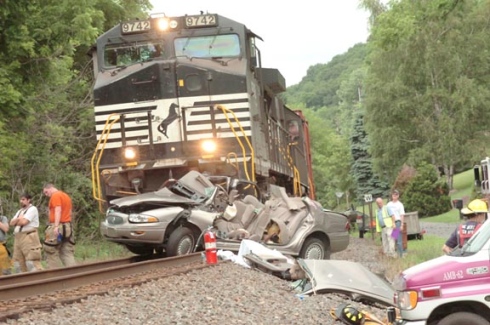 See Tracks? Think Train!
Fact Sheet
Operation Lifesaver, Inc., a non-profit organization founded in 1972 and dedicated to rail safety public education, has partnered with federal safety agencies and the nation’s railroads to launch the See Tracks? Think Train! campaign aimed at raising awareness about risky pedestrian and driver behavior around railroad tracks.
A person or vehicle is struck by a train roughly once every three hours.

Preliminary Federal Railroad Administration (FRA) data show:
 270 people were killed or injured at railroad grade crossings, up 16 percent from 232 in 2013.
 915 pedestrians were killed or injured while walking on or near railroad tracks in 2014, up 6 percent from 863 in 2013.
 Learn more about grade crossing or trespassing statistics in your state.
From those trespassing on railroad tracks for a shortcut or recreation, to drivers trying to beat the train at a grade crossing, people don’t realize important facts about safe behavior around railroad tracks:
 A typical freight train can take more than a mile to stop, even when emergency brakes are applied – the distance of 18 football fields!
 It’s never safe to stop closer than 15 feet from rails, and a train is at least three feet wider than tracks on both sides. 95 percent of all rail-related deaths involve drivers trying to beat a train, or people trespassing on railroad tracks.
 More than 50 percent of people injured or killed while trespassing on railroad tracks have drugs or alcohol in their system.
 Railroad tracks are private property, and walking on them is trespassing – it’s illegal and dangerous; you risk being ticketed and fined, seriously injured or killed.
 Links to more resources: driving safety tips, pedestrian safety tips, and passenger rail safety tips.
The campaign includes PSA (public service announcement) elements that reinforce to the public that when you match yourself or your vehicle up against a train, “It’s No Contest.”
 The attention-grabbing video PSAs clearly illustrate that your car is no match for a train at a crossing, underscoring the need for driver caution.
 The campaign includes bilingual PSAs that will air on TV and radio, and print ads to be displayed on highway billboards and other areas to attract attention.
 Campaign partners include the Federal Railroad Administration, Federal Highway Administration, and Federal Transit Administration.
 For downloadable creative elements, including infographics, PSAs, posters and more, visit http://www.seetracksthink.org
Education and outreach is key to saving lives, and the See Tracks? Think Train! PSA will be supplemented with ongoing education efforts of Operation Lifesaver’s 50-state network of volunteers who work with the public through events at schools, with law enforcement, first responders, professional drivers and community organizations. For more information about Operation Lifesaver,  SeeTracksThinkTrain.org