Service on the B Branch of the MBTA Green Line is suspended between Packard’s Corner and Kenmore Square due to a collision between a car and a Green Line train on Commonwealth Avenue.

An MBTA spokesperson told NewsCenter 5 that the car collided with the Green Line B Branch trolley near the Boston University Bridge at about 3 p.m. Wednesday.

Video from Sky5 shows the driver’s side of the car, a blue Maserati sedan, wedged against the front of the Green Line train.

MBTA Transit Police Supt. Richard Sullivan and the MBTA spokesperson both told NewsCenter 5 that no injuries were reported in the crash.

Both doors on the passengers’ side of the Maserati were open by the time Sky5 arrived at the scene. 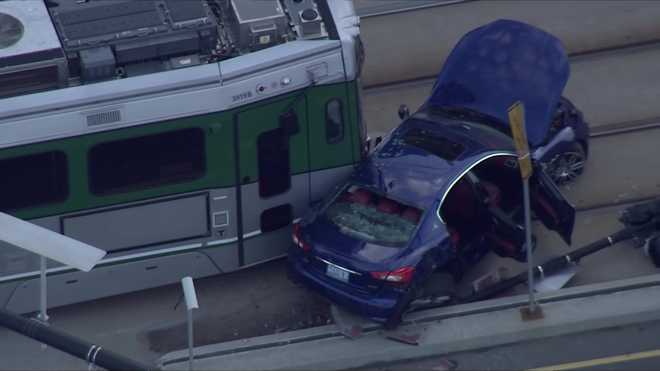 The train involved in the crash is one of the MBTA’s new Green Line cars. It is unclear how many people on the train at the time of the collision.

*TRAINS MAGAZINE has An Awesome Story on The Boston South Station in the April 2022 issue …. Be sure to pick one up at the nearby book store!

*NewEnglandRailroading.com has added a New Guest Book .. please sign our guestbook…. Thank you

Federal investigators in their final week of reviewing the safety of the MBTA have issued a series of five special directives ordering the transit agency and an oversight agency “to take immediate action on safety issues.”

The Federal Transit Administration’s review began in May after the agency sent a letter to MBTA General Manager Steve Poftak saying they’re extremely concerned about “the pattern of safety incidents” citing “derailments, train collisions, grade crossing fatalities, and incidents that have endangered both MBTA employees and its passengers.”

Wednesday’s announcement of the FTA directives formalizes the four areas of concern that MBTA Chief safety officer Ronald Ester revealed Monday to the MBTA Board of Directors:

In regards to tracking maintenance, the FTA wrote that overnight work windows are insufficient for the MBTA to address the system’s needs and that aging equipment also hampers progress. They found, for example, that a Green Line work train has been inoperable for at least 8 months.

The FTA also identified backlogs of thousands of known defects related to the rail infrastructure. One example where the MBTA was specifically ordered to make repairs was a curved track section on the Orange Line between Tufts Medical Center and Back Bay Stations, which has been under a speed restriction due to excessive wear and defects since 2019.

Additionally, the federal inspection found the MBTA’s Operations Control Center “is not appropriately staffed,” which creates “an increased safety risk.” The MBTA is being ordered to ensure all staff members are properly certified, that they have enough time between shifts and that supervisors are not simultaneously assigned dual roles.

Four of the FTA’s directives were issued to the MBTA and the fifth was addressed to the Department of Public Utilities. The directives instruct the MBTA to provide responses or take actions within specific timeframes ranging from 24 hours to 30 days.

“FTA underscores that transit riders in the Boston area should not interpret the special directives issued today as a reason to avoid the MBTA subway or light rail,” the agency wrote in a statement. “Rather, FTA’s actions provide system-wide measures to fix longstanding issues with the agency’s overall safety program and culture.”

Additionally, FTA said it will be providing “technical assistance” to the MBTA and DPU to help address the highlighted issues.

Safety was also a major topic at the MBTA Board of Directors’ meeting last week about the budget for the 2023 fiscal year.

Investments planned for the next budget include $5.5 million for a program that will conduct safety inspections. Those will include areas where riders were injured or killed in recent incidents, including escalators, stairs and transit infrastructure.

The plans also included adding 148 new safety positions to the MBTA’s payroll during the fiscal year. Those include 41 jobs in rail yard safety, 28 jobs for facilities maintenance and 18 for proactive maintenance inspections.

Maintenance has also been an ongoing area of concern for the MBTA. An estimate in May 2019 projected it would cost $10.1 billion to replace all outdated equipment and infrastructure with modern alternatives, State House News Service reported.

Meanwhile, watchdogs like Brian Kane, executive director of the MBTA Advisory Board, have warned that the transit system is headed toward a “financial cliff” once pandemic aid ends next year.